Light as energy
Light is remarkable. It is something we take for granted every day, but it's not something we stop and think about very often or even try and define. Let's take a few minutes and try and understand some things about light.
Simply stated, light is nature's way of transferring energy through space. We can complicate it by talking about interacting electric and magnetic fields, quantum mechanics, and all of that, but just remember--light is energy.
Light travels very rapidly, but it does have a finite velocity. In vacuum, the speed of light is 186,282 miles per second (or nearly 300,000 kilometers per second), which is really humming along! However, when we start talking about the incredible distances in astronomy, the finite nature of light's velocity becomes readily apparent. It takes about two and a half seconds, for instance, for a radio communication travelling at the speed of light to get to the moon and back. 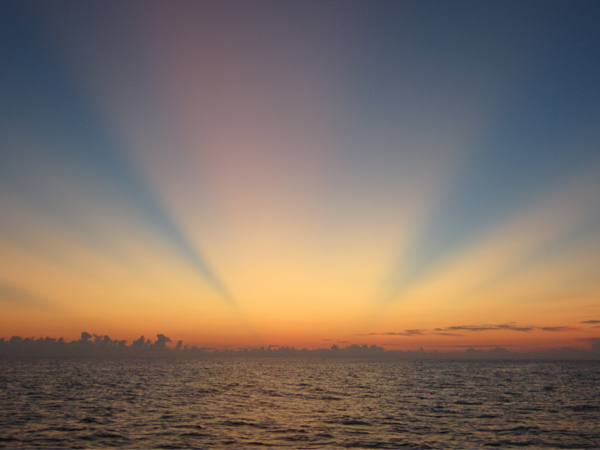 You might find it interesting to remember, the next time you watch a beautiful sunrise or sunset, that the sun itself actually dipped below the horizon eight minutes earlier--it takes that long for the light to reach the Earth! And, of course, every newspaper article you ever read about astronomy will always include the required statement, "A light year is the distance light travels in one year at the speed of 186,282 miles per second, about 6 trillion miles." (Well, 5.8 trillion miles actually, but what's 200 billion miles among friends?)
We should also highlight right up front that light is more generally referred to as electromagnetic radiation. Okay, we used a big word. It had to happen sooner or later. But too often when we say "light" it is mistaken to mean "optical light," which is roughly the radiation visible to our eyes. Visible light is a tiny portion of a huge smorgasboard of light called the electromagnetic spectrum. For our convenience, we break this smorgasboard up into different courses (appetizer, salad, etc.) and refer to them by name, such as gamma-rays, X-rays, ultraviolet, optical, infrared, and radio. However, it is important to remember that they are all just light. There are no "breaks" and no hard boundaries in the electromagnetic spectrum--just a continuous range of energy.
Particles and Waves
Physics experiments over the past hundred years or so have demonstrated that light has a dual nature. In many instances, it is convenient to represent light as a "particle" phenomenon, thinking of light as discrete "packets" of energy that we call photons. Now in this way of thinking, not all photons are created equal, at least in terms of how much energy they contain. Each photon of X-ray light contains a lot of energy in comparison with, say, an optical or radio photon. It is this "energy content per photon" that is one of the distinguishing characteristics of the different ranges of light described above. Even though it is not strictly correct, it is hard not to think of a beam of light as a collection of little "light bullets" all strung together in a row.

The "wave" model of light.
The other way of representing light is as a wave phenomenon. This is somewhat more difficult for most people to understand, but perhaps an analogy with sound waves will be useful. When you play a high note and a low note on the piano, they both produce sound, but the main thing that is different between the two notes is the frequency of the vibrating string producing the sound waves--the faster the vibration the higher the pitch of the note. If we now shift our focus to the sound waves themselves instead of the vibrating string, we would find that the higher pitched notes have shorter wavelengths, or distances between each successive wave. Likewise (and restricting ourselves to optical light for the moment), blue light and red light are both just light, but the blue light has a higher frequency of vibration (or a shorter wavelength) than the red light.

The colors of the familiar "rainbow" of visible light correspond to differing wavelengths of the light, here shown on a nanometer scale. The wavelengths get successively larger as one moves from left to right. Optical light runs from about 400 to 700 nanometers.
It's the same way as we move throughout the electromagnetic spectrum. Each range of light we have defined above corresponds to a range of frequencies (or wavelengths) of light vibrations. These wavelengths are one of the primary indicators we use to describe light and spectra on a graph. Displaying a spectrum as a graph instead of just a color bar allows us to measure the light.
For instance, the "rainbow" of color shown in the figure above is what you see when you pass white light through a prism. What may not be obvious, however, is that the "intensity" or brightness of the light is also changing along with the colors. If we converted the "rainbow" into a graph of light intensity versus wavelength, it would look like this: